Writing an UDO review can be as easy as copy/pasting your last review, really.  Some albums have more of an Accept vibe, others are slightly more contemporary, but basically you know what to expect. Does their latest release break the pattern?

“Steelhammer” is a fairly safe release, with some keyboards thrown in for added flavour and some excellent guitar playing. Unfortunately, precious few of the songs manage to ignite the spark. After the strong opening salvo of the title track, things start going downhill. “Metal Machine” is as pedestrian as metal gets and they manage to follow it up with the even more groan-inducing “Basta Ya”… Fortunately there’s tracks like “Death Ride” to even things out a bit. The second half of the album is actually better than the first.

It doesn’t help that Udo’s voice is starting to show serious signs of wear (ballad “Heavy Rain” is painful), or that the guitars sound very synthetic.

Personally, I liked predecessor “Rev-Raptor” a lot better, as that one sounded far more inspired.

If you’re an UDO fan, chances are this album won’t disappoint. If you’re looking for an introduction to the band, you’d be better off checking some other releases first.

Out now on AFM Records

A new Accept album? That obviously means Udo Dierkschneider can latch on with a release of his own…

UDO, the band, have been on quite a strong streak in recent years. Mastercutor, Dominator, Rev-Raptor were all quite strong albums.

Seeing as Rev-Raptor was only released last year, it was a bit soon for a new studio album. Enter Celebrator, a compilation of “rare tracks, remixes and collaborations”. Or, put more concisely, assorted leftovers. Maybe it’s just me, but I can’t imagine many people waiting for a version of “Balls To The Wall”, rearranged as a piano ballad. “Platchet Soldat”, a bland metal track with lyrics in Russian? A duet with Doro Pesch? Please…

The best tracks are the remixes of tracks that appeared on earlier albums, but those really don’t add anything to the original versions.

It’s not a bad album, but a totally pointless one. Just stick with the regular albums if you want to discover UDO. 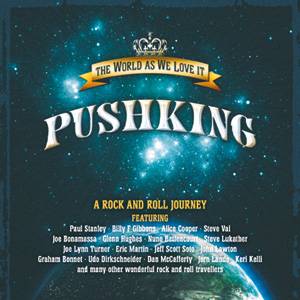 Pushking are one of Russia’s biggest rock bands having released 15 albums to date, but then without the exposure of the like Gorky Park got in the late 80’s how are we to know?  But with  “The World As We Love It”; and thanks to producer Fabrizio Grossi that may well change for band have scored one hell of a guest list for their new album which sees selected cuts from the bands previous releases re-recorded each with a special guest or two on each.

Musically this is competent hard rock nothing truly spectacular but a pleasant enough listen from start to finish.

Highlights come in the guise of the Alice Cooper led “Troubled Love” which is a nice mix of Cooper’s 70’s rock and late 80’s commerciality.  The melodic minor blues of “Tonight” with Glenn Hughes and Joe Bonamassa is touching and classy whilst Hughes also sounds great on “Private Own”.   Bluesy hard rock fans are well catered for with the Joe Lynn Turner led “Head Shooter” and Paul Stanley leads the commercial rocker “Cut The Wire” with his usual flare and panache.  Steve Vai plays with more emotion than normal on the excellent “My Reflections After Seeing The Schindlers List Movie” and its another highlight.

Its not all good though, Udo Dirkschneider will always be an acquired taste and “Nature’s Child” is quite laughable in places thanks to his pneumatic drill delivery, likewise Graham Bonnet has delivered better than what is heard on “God Made Us Free” although the song itself is not too bad.

Musically the Russian band are competent players with nothing flashy or overly original to either annoy nor dazzle but they can pen a good tune as it evident from the majority of this release.

Overall a nice addition to the collection for fans of the assembled guest list.  The production is perfectly fine and there is a nice pace to the 19 tracks on offer.

One to look into further. 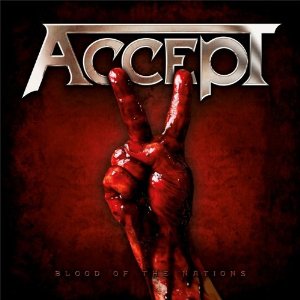 When I were a lad, Accept were a force to be reckoned with. Denim jackets were adorned with Accept back patches, they topped the album charts with releases such as “Metal Heart” and “Russian Roulette” and they filled the biggest venues. After Udo’s initial departure however, it all started to fizzle out. Not even the reunion could reverse the downward slide. Udo, as we all know, managed to get quite a healthy solo career going. The others mostly disappeared from the public eye. Until 2010 that is. With a rock solid line-up, formed around the song writing nucleus of Hoffmann/Baltes and featuring ex-TT Quick singer Mark Tornillo, Accept have released this new album. And what an album it is.

Opening track “Beat The Bastards” is the aural equivalent of a smack upside the head. A fast paced metal song with lots of guitar solos. Showcase track “Teutonic Terror” (don’t tell me you didn’t catch the video on youtube) does much the same, only at a slower pace. We get our first sniff of teutonic backing vocals on this one. “The Abyss” continues much in the same vein. The title track is classic Accept fare, only with a better singer. Sorry Udo… “Shades Of Death” has some very cool rhythm playing. This one wouldn’t have been out of place on “Metal Heart” for instance. The heat is turned on once again for “Locked And Loaded” an up tempo track so scorching it peels paint! Bonus track “Time Machine” is another slab of vintage Accept. “Kill The Pain” is a ballad the guys just wouldn’t have been able to pull off with Udo still in the ranks. Tornillo really shines here. So does Hoffmann for that matter. “Rolling Thunder” and “Pandemic” pick up the pace again, doing what it says on the tin. “New World Coming” is groovy and melodic. “No Shelter” is another fast track that has those trademark clean rhythm guitars that let the music breathe a bit. A nice extended solo section is the icing on the cake. Album closer “Bucket Full Of Hate” completes the circle. It’s another killer metal song much like the first three tracks. A shame the album ends on a fade out rather than a bang though.

Overall the performances are kick ass. Hoffmann plays like a man possessed, there is some nifty guitar work on this platter. Mark Tornillo is actually a huge improvement over Udo. He can do the sneer but he can also sing, which helps the band in the more melodic moments. Accept sound very much like a current band, without losing their identity, which is at least partially due to Andy Sneap’s excellent production.

So is there nothing bad to say about this album? Well, at 72 minutes it’s too long. Unlike many other bands though, it’s not just a case of cutting some filler tracks. All the songs are good in their own right. There’s just a couple too many of them.

If you call yourself a metal fan, you owe it to yourself to get this album.