Our appreciation for Finn classic rock outfit The Milestones is well known here at V1.  With the band having just released their fourth album “Higher Mountain – Closer Sun” we felt it would be rude not to catch up with guitarist Tomi Julkunen for another interview.  Enjoy.

Tomi, many thanks for agreeing to another interview with us at VirtuosityOne, and congratulations on the release of the new Milestones album “Higher Mountain –Closer Sun”.

Thanks Andy, it’s my pleasure. Got to be happy that we are interesting enough that people want to read about us. So much competition and so many bands out there these days, even more than last time we did this.

The new album to my ears is bigger and better than its rather excellent predecessor “Devil In Me”. It seems the band are pretty fired up and motivated right now, is that a fair assessment?

Cheers, yes it is indeed! Devil In Me was a big step for us as the album before that was released 10 years earlier. On DIM we were getting back to our real sound, which is that classic rock / southern rock kinda sound. The band is more motivated than ever and that’s amazing in itself as we’ve been doing this almost 20 years now. Playing is more exciting than ever and I’m sure people who have to record or come to our show can also feel the excitement. It feels like we’re only getting started and really starting to find our own voice.

So tell us about the making of the album from start to finish, how soon after “Devil In Me”did the process begin and what happened from there?

We already started writing new songs before Devil In Me was even released. We just jammed and wrote shitload of new songs. We also played some of them live just to see how people react to them. I think we had around 30 songs to choose from. It was cool as now we had to really think which songs we could put on the album. There’s couple of really cool ones that we might do something with later on, of maybe pick a riff from one song and some other part from another song and just combine different parts from different songs.

Once again there is a very live feel to the album. Was it recorded with the band in one room or individual instruments then pieced together?

Cool, that’s what we were aiming for, to get that real live sound. It was recorded with the band in one room to get that feel. We’ve tried different kind of methods but that’s the natural one, all in the same room. Lot of people say that we sound pretty much the same live as on the record so why not, we wouldn’t be able to capture all the energy and the live feel if we recorded separately one instrument at the time. It also lot more fun to play when we’re all in the same room where you can see all the faces, smiles, nods and all that.

We have a nice cross section of material, from good time up tempo rockers like “Walking Trouble”and “Shalalalover”to more mellow moments like “Oh My Soul”and “Grateful”, what were you as a band looking for in this collection of songs and how did you go about setting the track listing?

We wanted it to be rocking and mellow record at the same time. It’s boring if every song has a same kind of tempo or feel to it. Now we have nice collection of up tempo rockers, mid tempo songs and there’s a slow acoustic one too. It’s very balanced record I think. I myself like records like that.

It was great to hear the smoking cover of Foghat’s “Drivin’Wheel”, they are a band that isn’t really that known here in Europe (Slow Ride aside) so it was nice to hear you guys paying them some dues. What led to doing this particular cover?

To be honest, I hadn’t even heard Drivin’Wheel before. I only knew we sounded bit like Foghat and that they’ve been around for ages. It was Tommi, our drummer, who came up with the idea. He played it for us and straight away we knew that it would be perfect song for us to cover. I think Tommi knows someone from Foghat or their roadie or something like that. I’m proud of our version and I think we did a great job. It’s a great song!

What guitar gear did you and Marko Kiviluoma use this time around and how do you two generally go about dividing up guitar duties on the tracks?

We used the same gear we always use; Gibson and Fender Guitars, different models. As for amps I used only my old reliable, Marshall JCM 800 from the 80’s. Marko had his Vox and Ampeg amps. Very basic stuff, some cool boutique pedal like Mad Professors but nothing too fancy. We get different sounds using different guitars with the same amps. That’s the big secret behind our sound.

What do you personally look to add to a song?

Something that compliments the vocals and Markos guitar parts. We never try to play exactly the same, that would be boring. We both have our own styles so it’s pretty cool to come up with different guitar parts. I try not to overplay or play too many solo licks while recording songs. It’s better that way, then you can add some cool licks when playing live. 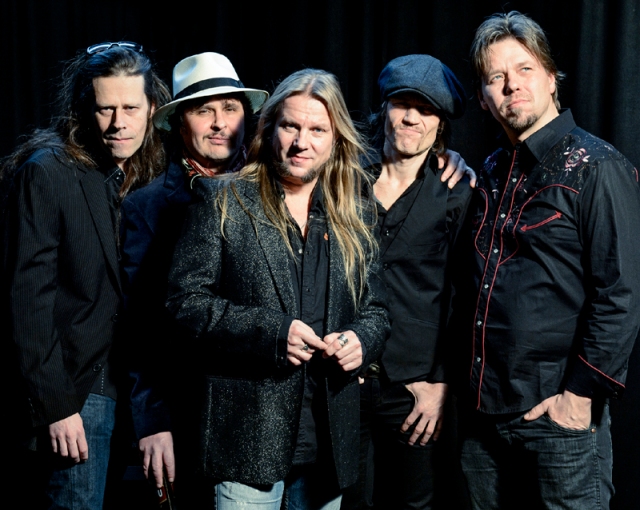 Who do you look too in guitar duos in other bands as indicators to how the two guitar thing should be done?

Obviously the guitarists in The Black Crowes, especially from Southern Harmony and Amorica era when Mark Ford was still in the band; The Rolling Stones of course, Aerosmith, Thin Lizzy and so on. Those guys know how to interact between two guitars. If you have two guitarists in the band you should be able to handle both lead and rhythm parts, that makes it even more interesting to listen to.

I see you’ve got a few gigs upcoming in Scandinavia, any plans for any further afield?

Yes, the plan is to get the album out in as many countries as possible and then play gigs all over. Of course these things take time to plan and arrange. We still haven’t got any deals outside of Finland but we’re working on it at the moment. We have only one German show confirmed and that’s for 2015. But keep checking the news from our website or Facebook page.

Anything else you’d like to let us know of what’s happening with the band and other projects you have?

We have a new video coming up soon for the song Walking Trouble as it’s gonna be the next single. It was shot at one of our recent live shows. We’re planning to release two radio singles at the same time, one for rock radio and other one for more mainstream stations. We’re also planning some cool stuff for our 20th anniversary which is on September. That might include re-releasing Vol 1. as it’s impossible to get it anywhere, it’s been sold out for years and years. But we’ll see, cool stuff coming up anyway.

Tomi, thanks for your time.

No problem at all, thank you. Looking forward to the next round with the album number five!