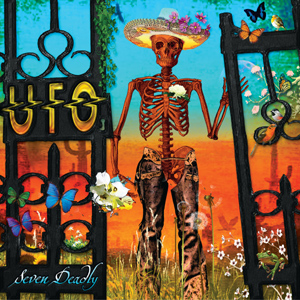 The arrival of Vinnie Moore seems to have given UFO a new lease on life. Albums have been solid, tours have not been cancelled…

Last album “The Visitor” was a bluesy, rather tranquil affair. Was it a portent of things to come?

Opening track “Fight Night” kicks off in typical UFO fashion. Think Chapman era UFO rather than Schenker though. There’s even several nods to Chapman in Vinnie’s guitar solo. Not to mention the fact his tone has changed. There’s more snap and attack, rather than the fusiony smooth sustain he used so far. “Wonderland” continues in the same style, while “MoJo Town” ups the heavy even more. “Angel Station” is a power ballad with plenty of power. “Year OF The Gun” wouldn’t have been out of place on “Wild Willing And Innocent”. With again those little Chapman-isms thrown in… Vinnie goes all out in “The Last Stone Rider”. He must have made a hobby out of copping former UFO guitarists’ styles, as he sounds like he’s channeling Schenker for this one.

“Steal Yourself”, “Burn Your House Down”, “The Fear”, “Waving Good Bye”… Is it really necessary to go into detail?

At ten songs, the album doesn’t outstay its welcome. It’s a more energetic affair than “The Visitor” overall.

Vinnie Moore has really grown into the band. He has adapted his own playing style to fit seamlessly, taking influences from his predecessors without losing his own identity.

Another fine UFO album that adds to the legacy, rather than detract from it.

Widgets
Be sure to check the review and interview database links at the top of the page for full site content.